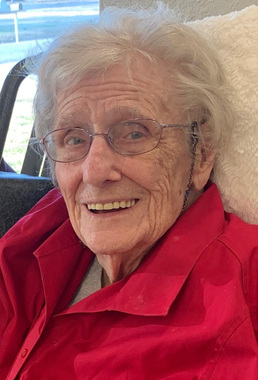 Adelia Marea Bradford Clark was born on July 23, 1920, at Greenwood Farm in Cherokee County, Kansas, and passed away on Saturday, December 7, 2019, in the evening at Quaker Hill Manor in Lowell, Kansas. She was an only child of parents, Ralph T. and Myrtle (Peters) Bradford, longtime residents of Cherokee County, Kansas.
Adelia attended Lostine rural school and graduated from Riverton High School in 1938. She then attended Kansas State Teacher's College (Pittsburg State University) in May of 1942, with a Bachelor's of Arts in Speech and Declamation.
She was united in marriage to Alvie E. (Pete) Clark on June 30, 1943. They were neighbors on adjoining farms and attended school together at Lostine rural school.
During World War II, she worked at the Jayhawk Ordinance Defense Plant which was located north of Riverton, as a secretary and clerk until her husband returned home from the war in Europe.
Adelia was well known for her humorous and dramatic presentations. For her talent, she received many awards and citations across the state. She was an active member of the First United Methodist Church of Galena, Kansas, where she taught Sunday school for many years as well as helping with the United Methodist Youth Group and United Methodist Women's Organization. She was a 50 year member of the Galena P.E.O. Chapter AB and past president of this organization.
Adelia was a 75 year member of the Amy Chapter of the Galena Order of Eastern Star, past Worthy Matron of Amy Chapter, and served as District Aide at the state meeting. Other organizations she was active in were the Lostine Lassies Coffee Group, Cherokee County Home Extension Club, and the Jayhawk Janes - a group of women who worked together during WW II and continued a lifelong friendship. She gave time and energy to many organizations and activities in the community including Girl Scouts, Cub Scouts, 4-H, and the Methodist Youth Group. She also served many years on the Cherokee County Election Board.
A very important part of her life was being a housewife and helping her husband with the farm. During the summers, not only did she take many meals to the fields, you would see her driving the grain trucks to the grain elevators or transporting people from field to field.
Adelia was preceded in death by her parents, her husband (Pete Clark), and her grandson (Scott Clark). She is survived by a daughter, Anita Beth Clark and husband, Tom Simpson, Leawood, Kansas, a son, Brad Clark and wife, Elaine, Riverton, Kansas, and a daughter, Cathy (Clark) Thompson and husband, Rick Thompson, Coffeyville, Kansas. She is also survived by her grandchildren: Mitchell Singleton and wife, Sylvonna, Leawood, Kansas, Catherine (Singleton) Schroeder and husband, Robin, Overland Park, Kansas, Brad Clark, Carthage, Missouri, Melissa Clark, Marshfield, Missouri, Ryan Thompson and wife, Julie, Coffeyville, Kansas, Jessica (Thompson) Jacobs and husband, Bob, Overland Park, Kansas, and Lisa (Thompson) Scheck and husband, Ben, Coffeyville, Kansas. She is also survived by 18 great-grandchildren and two great-great-grandchildren.
Memorials are suggested to the First United Methodist Church, Galena, Kansas, and Adelia Bradford Clark Endowed Scholarship fund in Speech Communications at PSU. Contributions may be left with the Derfelt Funeral Home in Galena, Kansas.
Visitation will be on Tuesday, December 10, 2019, at 10 a.m. with church services following to honor Adelia's life starting at 11 a.m. at the First United Methodist Church, 520 Joplin Street in Galena, Kansas. Her final resting place will be at the Messer Cemetery in Cherokee County, Kansas.
Arrangements are under the direction of Derfelt Funeral Home, Galena, Kansas.
Online condolences
may be expressed at
derfeltfuneralhomes.com
Published on December 10, 2019
To plant a tree in memory of Adelia Marea Clark, please visit Tribute Store.

Plant a tree in memory
of Adelia

A place to share condolences and memories.
The guestbook expires on December 09, 2020.