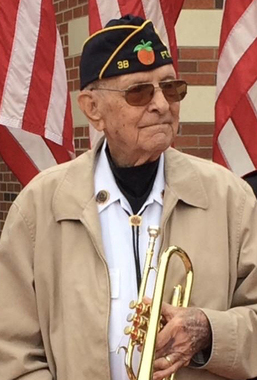 Back to Bruce's story

Bruce M. Benson was born December 9, 1924, to Edmund and Florence (Montgomery) Benson, in Akron, Ohio. He has been a resident of Webb City for 73 years, moving here from Akron to join his bride, Jane Van Hoose Benson, of Webb City.
Before being drafted into military service, he attended Miami University, Oxford, Ohio, majoring in Business Administration with a minor in Music, where he was a member of Sigma Chi Alpha Chapter.
Bruce was one of "the greatest generation" who served our country as part of the U.S. Army in World War II. Prior to overseas duty, Bruce was stationed at Ft. Crowder in Neosho, where he met Jane, his wife of 68 years. He was playing in the band and she was dancing with the USO. They had four children: Susie Crutcher (Ron), Lori Stenson (Randy), David Benson (Jeanne), and Van Benson (Tammy); 12 grandchildren; and 24 great-grands with #25 on the way.
Bruce's first assignment was with General MacArthur's Rear Echelon in the Philippines on a 33-man signal team as an installer/repairman/tele-phone/telegraph at the Quezon Institute. His second assignment placed him in the trumpet section of the 281st AGF 60-piece band under the direction of Warrant Officer Frank Chemay.
Music has always been an important part of the Benson family's life. During his career as owner of The Contemporary Shop and a charter pilot for Mizzou Aviation, he also led a four-piece combo called "Madison Street" with his two sons and friend, J.R. Driskill. Even in his later years, Bruce continued to hone his skills on the cornet by taking lessons himself and took great joy in passing on his love of music to the younger generation through music lessons. Right up to the end, Bruce remained active playing along with the organ on Sunday mornings at First Presbyterian, Webb City, and since August of 2016, he has played "Taps" every night at sunset facing the flag at the Webb City Post Office. He was a member of American Legion Post #322, Bugles Across America, an organization that provides live bugle "Taps" at military services, and has volunteered for the Salvation Army Christmas bucket brigade.
Bruce befriended and held close everyone with whom he came in contact. He loved people and promised his dear Janie, following her death, that he would continue to lead the family in Christian faith, family love, and patriotism. Well done, Dad!!
The family will be gathering and welcoming friends on Wednesday, February 12, from 6 to 8 p.m. at the King Jack Park Mining Days Event Center, 703 Dawson Drive, in Webb City. A memorial service will be held Thursday, February 13, at 11 a.m. at the First Presbyterian Church of Webb City.
In lieu of flowers, tribute contributions may be made to the Webb City Senior Center, 210 Pennsylvania, Webb City, MO 64870, or Charlie 22 Outdoors, which provides outdoor activities to our nation's veterans, 1520 Gold Dust Drive, Webb City, MO 64870.
The family wishes to thank so many friends and acquaintances who have expressed condolences for our beloved Dad, Grandad, and "Pops".
Published on February 12, 2020
To send flowers to the family of Bruce Benson, please visit Tribute Store.

Send flowers
in memory of Bruce

A place to share condolences and memories.
The guestbook expires on February 11, 2021.

Anita J Henson
When my husband and I got married 50 years ago and joined the First Presbyterian Church in Webb City we met Bruce and Jane Benson. They were such a delight to be with in a special group that met the first Sunday evening of the month. We would have dinner together in the church lower level. Bruce was so talented in his musical abilities and Jane was too in her gift of dance. They were a great example of a Wonderful marriage in which they had Susie, David,Van, and Laurie. All very talented . I am happy I knew these Wonderful people. Just the Best!!
Dan Curry
Bruce was always a nice man. He'll be missed by many.
Dan Curry
Bruce was always a man. He'll be missed by many.
Nancy Carlson
Sending Prayers for your family
Sherri Clark
I never met him but he was a wonderful and loving man. Prayers and love to his family. He will be truly missed.
Nancy Richardson
I liked to "hang out" with Bruce at the WC Senior Nutrition Center and eat lunch together when possible! He was a dear sweet man! He was always interested in what I said--was very attentive to people. When our arrival times varied so that we sat apart, when we spotted each other we would always wave to each other.
I had the privilege of meeting Jane when she was doing a book signing of her ballet book at the WC Walmart store. She was a delight! Bruce never tired of telling the story of how they met!
As time went by, Bruce grew so ready to be with his bride again! I know the Lord has both Bruce and Jane together in His arms!
Now that they have become angels with the Lord holding them, I kno...w that Bruce is playing his coronet while watching Jane twirl!!
Rest in Peace Dear Friends! Love, NancyRead more 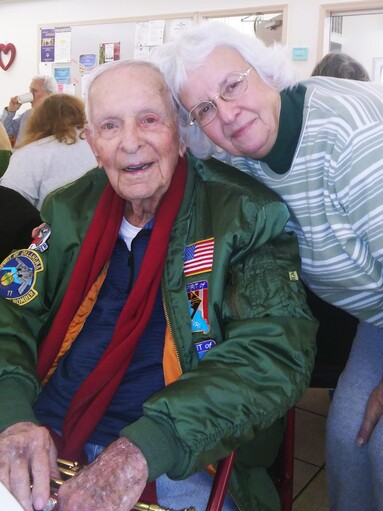