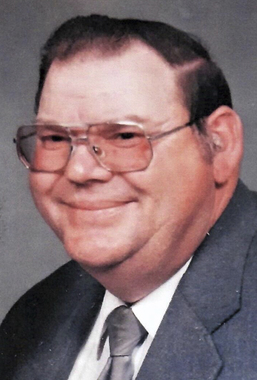 Buddie L. Wallace was born October 26, 1937, in the Tipton Ford community, one of four children to William and Laura Ann (Watruss) Wallace. He entered into rest on January 8, 2020, in Joplin, MO, following a three week illness at the age of 82.
Buddie was a lifelong area resident and graduated from Diamond High School. He owned and operated a trucking company, served as chief of police for the City of Diamond and worked for the Newton County Special Road district from which he retired. Buddie enjoyed guns, fishing and hunting. He was a member of Duenweg Baptist Church.
Buddie and Faye Wallace were married in 1957, at Diamond. She survives.
Additional survivors include three children, Linda Swofford, of Joplin, Sharon (Kenneth) Greninger-Durbin, Carthage, and Wayne (Barbara) Wallace, of Diamond; sister-in-law, Fern James, of Diamond; brother-in-law, Elvis Hency, of Diamond; eight grandchildren; and 11 great-grandchildren. In addition to his parents, he is preceded in death by a grandson, Dewey Swofford; two sisters, Bonnie and Betty Jane; and a brother, Billy.
Funeral services for Buddie will be held on Tuesday, January 14, at 1 p.m. at the Diamond Baptist Church, Pastor C. G. Gilmore and Pastor Ron Crow will officiate. Interment will follow in the Diamond Cemetery and those serving as pallbearers will be David James, Carl James, Travis Heckmaster, Austin Greninger, Dylan Wallace and Wayne Logan. The family will receive friends on Monday evening from 5:30 to 7 p.m. at the Clark Funeral Home, Neosho, mO.
Contributions in memory of Buddie may be made to the American Cancer Society, in care of Clark Funeral Home, PO Box 66, Neosho, MO 64850.
Online condolences may be posted at www.clarkfuneralhomes.com.
Services are under the direction of Clark Funeral Home, Neosho.
Published on January 12, 2020
To send flowers to the family of Buddie L. Wallace, please visit Tribute Store.

Send flowers
in memory of Buddie

A place to share condolences and memories.
The guestbook expires on January 09, 2021.