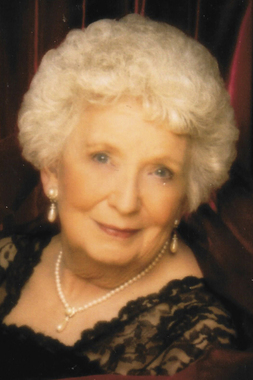 Back to Catherine's story

Louise Marsh, of Webb City, Mo., age 87, was taken by her Lord and Savior to be with Him in his heavenly home on Friday, September 08, 2017, surrounded by her loving family. She was the oldest daughter of Alvin and Mabel Newby, born in Webb City, on July 24, 1930. She had six younger sisters and three younger brothers. She grew up and attended school in Webb City. She graduated from Webb City High School, in 1948. With the help of her sister she moved to Pasadena, Calif., and began work with Bell Telephone Company as an operator. Other siblings followed, Lorene, Doris, Deloris, JoAnn, Marylou, Shirley, Gale, Stanley, and David. They were a close family that loved and helped each other as much as they could. In Long Beach, Calif., she met and married Roger David Marsh on March 3, 1956. When Roger retired from the United States Marine Corps, in 1973, the family moved back to Webb City. She was active raising her sons and daughters. She helped with Cub Scouts and Girl Scouts. She helped with Sunday school classes at Oronogo Methodist Church for many years. She worked at Sears, in Joplin, for 17 years. Never one to sit down, she worked part- time at the Webb City Junior High lunch room. For 25 years she helped organize and run Mining Days, in Webb City. She started her active membership with the Order of Eastern Stars, Oronogo, Mo., on September 10, 1975, and has been a member for 42 years. She was Worthy Matron in 1981 and 1993. She was active with the American Legion Auxiliary Post #322, of Webb City, for 35 years, helping with their bingo night and pancake breakfasts and other fund raisers over the years. She loved her family and enjoyed going to family reunions and visiting with her sisters and brothers every chance she got. Taking vacations and trips with her family was always a joy and something that she treasured and talked about all the time. With all the grandkids and great- grandkids, she was always going to birthday parties, school events and sporting activities, she was an avid Webb City Cardinal fan. In addition to her parents, she was preceded in death by her daughter, Patricia Phillips, in 1952 and her husband, Roger Marsh, on June 17, 2008. Survivors include her two sons, Roger Scott Marsh and wife, Irmgard, of Macon, Mo., and Tony David Marsh and wife, Monica, of Joplin, Mo.; two daughters, Rhonda Jo Frisby and husband, Richard, of Webb City, and Teresa Kay Marsh and Matthew Blankenship, of Oronogo. She also has 11 grandchildren and 23 great-grandchildren, with one great-great-grandchild expected. Memorial services will be held on Monday, September 11, at 2 p.m. in the chapel of Simpson Funeral Home, in Webb City. The family will do a private burial next to her late husband in Carl Junction Cemetery. In lieu of flowers, the family suggest memorial contributions to the American Legion Auxiliary Post 322, or the Order of the Eastern Star, Webb City. Cremation arrangements are under the direction of Simpson Funeral Home, in Webb City. Visit www.simpsonfh.com for online condolences.
Published on September 9, 2017
To plant a tree in memory of Catherine Louise Marsh, please visit Tribute Store.

Plant a tree in memory
of Catherine

A place to share condolences and memories.
The guestbook expires on September 08, 2018.