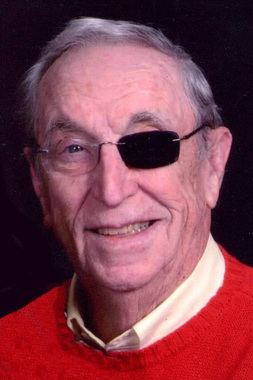 Back to Clint's story

Harold Clinton "Clint" Butler, age 85, of Lamar, Mo., went to his heavenly home on Monday, March 27, 2017, at Mercy McCune-Brookes Hospital in Carthage, Mo., following an aortic aneurism.
Clint was born on October 4, 1931, in Fair Play, Mo., to the late Lester Butler and Ethel Jeffries Butler. They moved to Lamar in 1938 where he graduated from Lamar High School in 1949.
On May 9, 1951, he married his high school sweetheart, Betty Jane Norwood, in Lamar where they raised their five children.
He worked hard as a telephone and cable engineer for 31 years before moving to Fort Worth, Texas, in 1982 where he bought and managed a telecommunications business, Plant Services Company.
In 2012, Clint and Betty moved home to Lamar to be closer to their family. In addition to spending more time with family and extended family in Lamar, Clint enjoyed membership at Lamar United Methodist Church.
Clint was involved in Special Olympics where his daughter, Pammy, was a participant. He was an avid sportsman and enjoyed golfing and fishing all of his life. He was also gifted with a beautiful singing voice and performed at many weddings.
In addition to his parents, Clint was preceded in death by his son, Brad Butler, and daughter, Pamela Butler.
Clint is survived by his wife, Betty Butler; a sister, Helen Gardner, of Lamar; three sons, Larry Butler, of West Fork, Ark., Stan Butler, of Overland Park, Mo., Jon Butler, of Naples, Fla.; and six grandchildren, Bryan Butler of Tulsa, Okla., Zach Butler and fiancé, Chantal Womack, of Cave Springs, Ark., Sarah Trapani and husband, Daniel, of Great Falls, Mont., Katie Bullock and husband, Andrew, of Tulsa, Aaron Butler, of West Plains, Mo., and Beau Butler, of Naples.
Visitation will be held at Daniel Funeral Home in Lamar on Saturday, April 1, at 1 p.m. with a memorial service following at 2 p.m. at the same location. Dr. Mark Turnbough will officiate.
Memorial contributions can be made to Lamar United Methodist Church or Barton County Senior Citizens Center, in care of Daniel Funeral Home.
Published on March 30, 2017
To plant a tree in memory of Clint Butler, please visit Tribute Store.

Plant a tree in memory
of Clint

A place to share condolences and memories.
The guestbook expires on March 29, 2018.