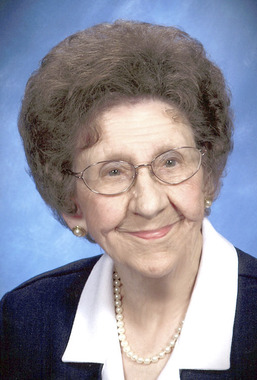 Back to Dorothy's story

Dorothy Katherine Claxton, age 98, of Joplin, MO, passed away on Wednesday, February 5, 2020, at Joplin Gardens, following an illness. Dorothy was born on April 29, 1921, in Hesper, IA, the daughter of the late Knute K. Sanden and Nora (Nelson) Sanden.
She married Donald Claxton on March 29, 1945. Together they were blessed with two children.
Dorothy has been a resident of Joplin since 1946. She worked as secretary for South Junior High for many years. She was a longtime member of Blendville Christian Church and recently attended 26th & Connecticut Church of Christ. She was a volunteer for Mercy and St. John's Hospital for over 30 years. She enjoyed traveling and spending time with her friends, family and especially her grandchildren. She had an infectious laugh, enjoyed life, and was an inspiration for aging gracefully.
Dorothy was preceded in death by her husband, Donald Claxton, in 1981; and by a brother, Delmar Sanden.
Dorothy is survived by one son, Doug Claxton and wife, Barbara, Joplin; one daughter, Debbie Brown and husband, Keith, Joplin; six grandchildren, Becky Sloan (Aaron), Jennifer Honeycutt (Nathan), Melissa Anderson (Jeff), Lara Davis (Steve), Jeremy Brown (Teresa), and Jason Brown (Abbie); 12 great-grandchildren and two great-great-grandchildren.
Funeral services will be 10 a.m. Monday at Mason-Woodard Chapel. Nathan Honeycutt, minister, will officiate. Burial will be in Seneca Cemetery. The visitation will be 3-4 p.m. Sunday at Mason-Woodard.
Memorial contributions may be given to the Ronald McDonald House, in care of the mortuary.
Arrangements are under the direction of Mason-Woodard Mortuary & Crematory.
Published on February 7, 2020
To send flowers to the family of Dorothy Katherine Claxton, please visit Tribute Store.

Send flowers
in memory of Dorothy

A place to share condolences and memories.
The guestbook expires on February 06, 2021.

Christina
Bless her heart She was a sweet lady, I’m going to miss seeing her!! I will be praying for her family!!!
View all