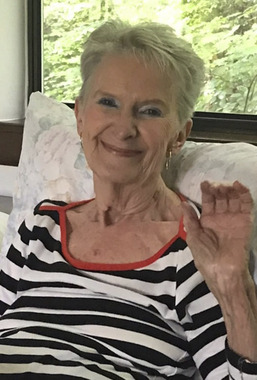 Back to Eleanor's story

Eleanor Alice Kempt (nee Eleanor Zimmerman), lifelong resident of Joplin, MO, died August 14, 2019 after only briefly failing health. She was born to Warren R. Zimmerman and Edna Duffield Zimmerman September 10, 1930.
She married Lloyd Eugene Kilgore in 1950, from whom she was divorced in 1962. She was happily married to Ray Kempt, of MonKem Truck Lines, from 1967 until his death in 2002.
She was preceded in death by her father Warren; her brother, Ronald, in 1974; her mother, Edna; her son, Jeff, in 1992; and her sister, Shirley, of Dallas, TX, in 2017.
She is survived by her son, Dr. John Kilgore, of St. Louis, MO, a cardiologist and Episcopal priest; four nieces and one nephew.
Eleanor was a graduate of Joplin High School in 1948, and was long involved in planning the many reunions of her class. She enjoyed being a housewife and mother as well as playing bridge, where her cunning was easy to underestimate. She belonged to the YW Matrons and the Joplin Woman's Club, and the Republican Women. For many years she served on the Foundation Board of St. John's Hospital and served as an active volunteer at St. John's Mercy Auxiliary for over 37 years. She was a friend of many, very social, and loved being at parties, usually the belle of the ball!
During her life she was fortunate to travel to almost all of the United States and many foreign countries in Europe and the Americas and was on the maiden voyage of the Queen Mary II.
During her life she met Presidents Ronald Reagen, George W. Bush, and John F. Kennedy. When JFK made a campaign stop in Joplin she met him at the Joplin airport and he said to her, "Well, I had heard that Joplin has many pretty women, but now I know for sure!" She had much vitality and spunk and loved to be dressed to the nines. Those who will miss her so much should know that she maintained her spirit and style to the very end.
Her life will be celebrated with the Episcopal Burial Service and Communion at St. Philip's Episcopal Church, 7th and Byers, at 2 p.m. Sunday, August 18, followed by a reception at her home in Redings Mill, to which all friends and family are invited.
Donations may be made to Lafayette House, in Joplin.
The assistance of Home Instead, particularly Carolyn Spiva, and Mercy Hospice, are greatly appreciated by her family and friends as they allowed her to enjoy the peace and tranquility of
her lovely home setting through her final days.
Published on August 16, 2019
To plant a tree in memory of Eleanor Alice Kempt, please visit Tribute Store.

Plant a tree in memory
of Eleanor

A place to share condolences and memories.
The guestbook expires on August 15, 2020.

Tammy Tisdale Schoff
Summer vacation with Auntie Sunshine, Mom, John, Jeff, Terry, & Tracey-either in Joplin or Dallas. Nothing was better. Then came Sharon, Kathy, & Linda into our playtime and it was even better! So many memories for so many years! How do you say, “Goodbye” after 58 years? So I won’t. I’ll say, “Until we meet again.” Here’s my hug-please share it with Moui, Ray, Jeff, Mom, Dad, Tim, & everyone you love up there. Have yourselves the party of the Century! We’ll see y’all when we get there.💕 Love you.
Terry Gray
Goodbye for now my Auntie One Way !!!💔I will think of you often 🙏You could always get to where you wanted to go but you couldnt get back very well , so now you dont have to worry bout that anymore . You are in Heaven now so just stay there and i will see you someday again !😇💋❤With all my Love , Terry
The Salanski Family

She was such a beautiful and caring women. She adored our children and always had such a positive attitude. We will truly miss her spunky personality and the wonderful women she was. God is loving her presence in Heaven!

Enchanted Cottage was purchased for the family of Eleanor Alice Kempt by Taylor Tisdale.  Send flowers

I WLL MISS ELEANOR AS A SPECIAL FRIEND. SHE ALWAYS HAD A SMILE AND KIND WORD FOR ALL THOSE WHO KNEW HER. I ENJOYED PLAYING BRIDGE WITH HER AT THE WOMAN'S CLUB FOR MANY YEARS. SHE WAS A REAL SWEETHEART.

Caring thoughts for the family and friends of Eleanor. Nothing can ease the difficulty of losing this dear lady. But every day-you are wished a little peace of mind. I will miss her sweet smile, funny texts and getting to visit with that dear lady.