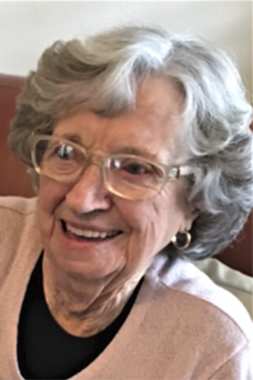 Back to Freda's story

Freda M. "McVey" Bailey, 100, passed away December 3, 2018, at Oak Pointe Residential Care, in Carthage, Mo. Freda was born October 7, 1918, in Miller, Mo., to Alvin and Pearl "Kessinger" McVey.
Freda had lived in Carthage since 1958. She worked at Ramsey's Department Store, on the Carthage Square, and was a member of the First United Methodist Church in Carthage. Freda was a Red Cross Volunteer and a Gray Lady at the former McCune Brooks Hospital.
Freda was united in marriage to Harold R. Bailey on October 17, 1936, in Aurora, Mo. He preceded her in death on July 25, 2001.
Freda is survived by one son, Gary Bailey (Marilyn), of Atlanta, Ga.; one daughter, Sue Carlton (Pete), of Carthage; one brother, Bill McVey, of Aurora; seven grandchildren, Dr. John Bailey (Melissa), David Bailey (Stacey), Rev. Michael Bailey (Laura), Chris Kennedy (Rick), Kelly Grove (Mike), Tom Carlton, Chase Carlton (Bridget); 24 great-grandchildren; and six great-great-grandchildren. Freda was preceded in death by one great-granddaughter, Mary Margaret Grove; and two sisters, Bonnie Williams and Doris Birchfield.
Memorial services will be held 11 a.m. Friday, December 28, at First United Methodist Church, in Carthage. Visitation will be held at 10 a.m. prior to memorial services. Burial will be at Maple Park Cemetery, in Aurora.
Contributions may be made to Children's Miracle Network or Autism Speaks, in care of Ulmer Funeral Home.
Online condolences may be made at www.ulmerfh.com.
Arrangements are under the direction of Ulmer Funeral Home.
Published on December 16, 2018
To plant a tree in memory of Freda Bailey, please visit Tribute Store.

Plant a tree in memory
of Freda

A place to share condolences and memories.
The guestbook expires on December 14, 2019.