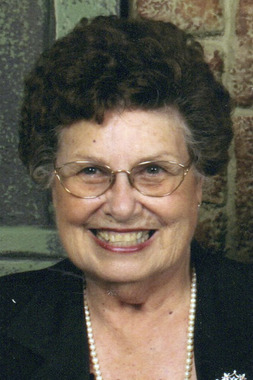 Back to Helen's story

Helen Eyvonne Arft was born April 9, 1928, to Floyd and Zula Gardner, in Jericho Springs area. She left this world to meet her heavenly Father June 14, 2016, in Republic, Mo. Helen was preceded in death by her parents and brothers, John, Dale, Don, and Aaron.
Helen married Carl Arft on Oct. 24, 1947. They celebrated their 68th wedding anniversary last year and he survives.
Also surviving are her two daughters, Carland (Jim) Dorris, of Republic, and Susie (Mark) Keepper, of Tulsa, Okla. She also leaves two grandchildren, Carlen (Ron) Baptista and Jarub Baird, both from Carthage; three great-grandchildren; and two brothers, Rex Gardner, of Redding, Calif., and Gene Gardner, of Fairbanks, Alaska.
Helen was active in the Milford Christian Church, where she taught the 4- and 5-year-old Sunday school class for 40 years. She was a member of the Milford Sewing and Extension Clubs. She was active in local and state Republican groups and Eastern Star.
While married to Carl, she worked hand-in-hand with him making their farm operation successful, and canned and preserved from her abundant garden. She was known community wide for her cooking skills. Her homemade noodles, hot rolls, and cinnamon rolls will be missed by her family. Being born around the Depression era, she grew fond of pearls, diamonds, pretty clothing, red lipstick, and romance novels.
Most importantly, she taught her family to put God first, love one another, to do their best, and be courageous. She never complained, but accepted what she could not change, and found happiness through her trials. She will be always a heroine to her family.
A graveside service will be held Friday, June 17, at 11:30 a.m. at the Mt. Carmel Cemetery on Highway 126, 3 miles south of Kenoma, in Barton County. There will be a visitation starting at 9:30 a.m., at the Konantz Warden Funeral Home, Lamar, Mo., with a procession to the cemetery to follow.
In lieu of flowers, the family request donations to be made to Missouri Crippled Children, Gideon's International, or Convoy of Hope (a disaster relief fund) at 1449 West Skyline, Ozark, MO 65721.
Published on June 16, 2016
To plant a tree in memory of Helen Eyvonne Arft, please visit Tribute Store.

Plant a tree in memory
of Helen

A place to share condolences and memories.
The guestbook expires on June 15, 2017.