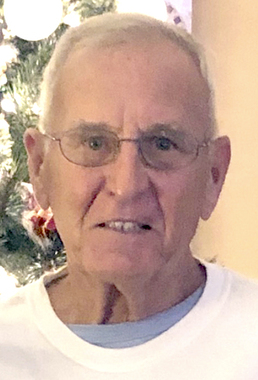 Back to Jimmy's story

Jimmy Calvin Daniel, age 75, of Webb City, MO, went to be with his wife of 53 years, Patricia Daniel, and his heavenly father on Tuesday, December 10, 2019, after a three-year battle with cancer.
He was born November 18, 1944, in Webb City, where he lived and worked his whole life. He owned and operated Daniel Drywall and Interior Painting.
Jim was a lifelong fan of the Webb City Cardinal football team and never missed a game. He was a member of Central Christian Center of Joplin.
Jim married Patricia Muldoon on July 29, 1966, in Joplin, MO. She preceded him in death on February 21, 2017.
He is survived by his son, James Raymond Daniel, of Springfield, daughter, Shawna Ann Spry and husband, Timothy David Spry, of Joplin; grandchildren, Maranda Ann Goff and husband, Brayden Allen Goff, of Webb City, Madison Jean Daniel, of Springfield, Ethan Calvin Daniel, of Springfield, Ryan Daniel Miller and wife, Cassie Lea Miller, of Webb City, Adam Scott Miller and fiancée, Danielle Victoria Duncan, of Neosho; two great-grandchildren, Aiden Scott Miller, Avery William Miller, of Neosho; baby boy Casyn Daniel Miller, coming in January, of Webb City.
Please join us in celebrating the life of Jimmy Calvin Daniel. Funeral services will be held on Friday, December 13, at 1p.m. in the chapel of Simpson Funeral Home, in Webb City, with Pastor Hank Deslatte and Pastor Doug Wilkerson officiating. A visitation will be held on Friday from 12 p.m. until service time. Burial will follow in Carterville Cemetery. Pallbearers will be Adam Miller, Ryan Miller, Brayden Goff, Ethan Daniel, Nick Pinion, and Dave Duncan.
Services are under the care of Simpson Funeral Home, in Webb City.
Visit www.simpsonfh.com for online condolences.
Published on December 12, 2019
To plant a tree in memory of Jimmy Daniel, please visit Tribute Store.

Plant a tree in memory
of Jimmy

A place to share condolences and memories.
The guestbook expires on December 11, 2020.