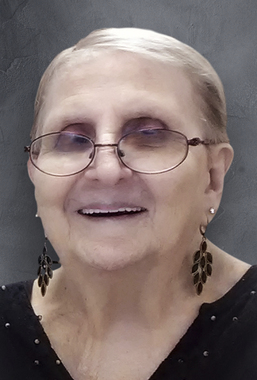 Back to Marjorie's story

Marjorie Imagene Sanders, age 86, Joplin, MO, passed away at 10:22 a.m. Tuesday, January 14, 2020, at Freeman West Hospital.
Marjorie was born July 6, 1933, in Carthage, to the late Paul Ketron and Bessie Barker Ketron and had lived in the Joplin area most of her life.
A homemaker, Marjorie was a former member of 6th Street Baptist Church. She will be missed by everyone that knew and loved her.
She married Roy Sanders on November 5, 1950, in Webb City, MO. He preceded her in death on March 25, 1989.
Marjorie was also preceded in death by her son, Charles Sanders; two sisters, Thelma Gordon and Myrtle Merl; and one brother, Clarence Ketron.
Survivors include two daughters, Mary Chaloupek and Teresa Cada, both of Joplin; one son, Ronald Sanders, Marshall, MO; two sisters, Vera Wormington, Roy, UT, Wilma Jean Long, Webb City; grandchildren, Susan White, Christine Bussing and husband, John, Billie Dunagan, Justin Dunagan, Tracy Sanders, Robert Sanders; 10 great-grandchildren; and two great-great-grandchildren.
Services are planned for Saturday at 11 a.m. at Parker Mortuary Chapel. Rev. Bob Martin will officiate. The family will receive friends following the services Saturday at the mortuary.
Arrangements are under the direction of Parker Mortuary.
Published on January 17, 2020
To plant a tree in memory of Marjorie Sanders, please visit Tribute Store.

Plant a tree in memory
of Marjorie

A place to share condolences and memories.
The guestbook expires on January 16, 2021.

Brenda Reddy
Marjorie enjoyed traveling on the OATs bus. Deepest condolences to you, Mary and to your family.
Rochelle
What a beautiful picture! You were so loved and will be missed dearly. Thank you for being such a sweet women to me. Your presence may be gone but your memory will never be forgotten ♥️
Anne Hartman
I will miss riding the OATS Bus with you Marjorie. We have been riding together for 27 years. We have been to a lot of places and had a lot of fun. You will be missed.
Jack and Kay Crow

So sorry for your loss.Our thoughts sand prayers are with you and your family.