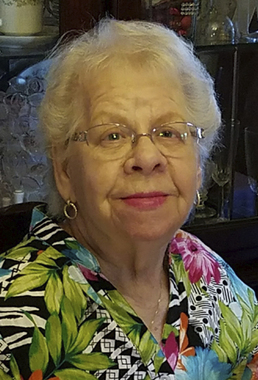 Back to Mary's story

Lifetime Joplin resident, Mary L. Putnam, 84 passed away Sunday, July 7, 2019 at St Francis Hospital in Tulsa, OK, from injuries suffered in a fall, July 3rd, at her daughter's home in Sapulpa, OK.
Mary was born in Joplin on August 30, 1934 to Beulah Marie (Goodwin) & Leonard Lee Clements. She attended Joplin schools and graduated from Joplin High School Class of 1952.
She married Harold Ray Putnam in Joplin on November 6, 1952 and they were married 66 years. He recently preceded her in death on February 15, 2019. Mary retired from The City of Joplin in 1996 after 25 years as a secretary for the Public Works Department.
Mary is survived by her five children, Vicky Ralston, Joplin, Michael Putnam (Charles Phillips) Brighton, CO, Dennis Putnam (Cari) Joplin, Patricia Putnam, Raytown, MO, and Cheryl Merry (Ralph) Sapulpa, OK; seven grandchildren, Amy Faulkner (Chris) Joplin, Andrew Ralston (Hannah) Tulsa, OK, Jason Putnam (Tiffany) & Blake Putnam of Joplin, Rachel Merry, Midland, TX, Katy Merry, Sapulpa, OK, Erin Merry, Sapulpa, OK, and one great-grandchild, Alanna Faulkner of Joplin. Mary was looking forward to the birth of a great-grandson, Baby Ralston in December. Mary was preceded in death by her parents and six brothers, Billy, Bobby, Charles, Nelson, Carl & Donald Clements and a son-in-law, George Ralston.
Mary loved being the matriarch of a large family and all birthdays, anniversaries and holidays were joyfully celebrated together. She loved cooking for a crowd, helping organize her high school class reunions, being an active member of First Christian Church and being surrounded by family. She missed Ray so much but was adjusting well on her own and enjoying life prior to her accident, with travel and activities planned with family.
Funeral services will be 10 a.m. Thursday at First Christian Church at 4th & Pearl. David Johnson, Minister, will officiate. Burial will be Osborne Memorial Cemetery. Pallbearers will be sons, grandsons and son-in-law, Michael, Dennis, Jason & Blake Putnam, Andrew Ralston & Charles Phillips. Honorary Pallbearers will be Ralph Merry, Tim Clements and Brian Clements.
The family will receive friends for visitation on Wednesday from 6-7 p.m. at Mason-Woodard Mortuary.
In lieu of flowers the family asks that contributions be made in Mary's memory to The First Christian Church building fund in care of the mortuary.
Arrangements are under the direction of Mason Woodard Mortuary.
Published on July 9, 2019
To plant a tree in memory of Mary L. Putnam, please visit Tribute Store.

Plant a tree in memory
of Mary

A place to share condolences and memories.
The guestbook expires on July 08, 2020.

john drennan
sorry for your loss. mary was a good friend of my aunt betty and was well liked
Janine Henry

I was so sorry to hear about Mary’s death I went to school with her and helped with the class reunions with her She will be greatly missed .