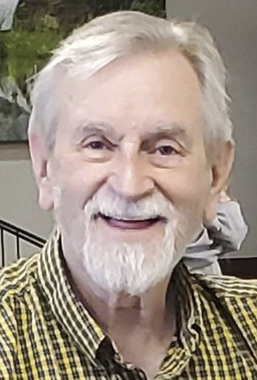 Back to Rick's story

Rick Wiseman, born Fredrick Allen Wiseman, Joplin MO, passed away Thursday, May 23, 2019, at Freeman Hospital.
Rick was born September 5, 1945, in Joplin, to Winfred and Vera Gardner Wiseman. After losing his father at an early age, Little Ricky became the center of his mother's life. Vera raised Rick in her local Joplin truck stops and restaurants, teaching him the value of hard work and how to make the perfect red-eye gravy. He was a loyal and devoted son until her passing.
Rick met Carol Orcutt in the time of sock hops and saddle shoes. They fell in love and were married at St. Mary's Catholic Church directly after high school. They spent every moment they could together from the time they met until his passing. Shortly after their marriage they began what Rick considered his crowning achievement, his family. Every year bringing a new son or daughter to their little home.
Rick and Carol raised their six children, in Joplin, to the sounds of Simon and Garfunkle and Jim Croce. They sacrificed to be able to send them through Catholic school and went to every game, play and event they could manage. Every friend of Rick's children who walked through the door of the Oak Ridge Drive home was considered one of the family. His gentle nature and wry humor made the house a natural gathering place.
Rick worked hard to care for his brood, the last of the great traveling salesmen. He instilled a sense of duty and work ethic into each of his children and grandchildren, as well as the ability to find the best diner and cup of coffee in every town he visited.
In his retirement, Rick worked tirelessly as an advocate for the mentally ill. He was involved with the local chapter of the National Alliance on Mental Illness (NAMI), helping with their annual charity walks and golf tournament fundraisers. He traveled to the capital often, advocating legislation for the protection of those with mental illness. Rick was active in the Catholic Church, and involved in youth group, Knights of Columbus and Cursillo. Devotion and Duty were his dictum.
Rick is mourned and survived by his loving wife, Carol; mother-in-law, Florence; four sons, Scott Wiseman, Christopher Wiseman and wife, Peggy, Noel Wiseman and wife, Natalie, Eric Wiseman and wife, Candace; two daughters, Marissa Winnett and husband, David, Rachel Goodrich and husband, Michael; grandchildren, Morgan, Rachael, Lauren, Jacob, Ellen, Connor, Ryann, Kyndall, Kathryn, Emma, Cannon, Hogan, John, Joe and Jack; as well as every postman, store clerk, pharmacist, nurse and friend he ever met. Our lives will not be the same without his warmth and humor.
A Memorial Mass is planned for Monday, June 3rd, at 10:30 a.m. at St. Peter the Apostle Catholic Church, to celebrate Rick's life. Rev. J. Friedel will officiate. Please wear bright colors and gather with joy.
Memorial contributions may be made to the National Alliance on Mental Illness, in care of Parker Mortuary.
Arrangements are under the direction of Parker Mortuary.
Published on June 2, 2019
To plant a tree in memory of Rick Wiseman, please visit Tribute Store.

Plant a tree in memory
of Rick

A place to share condolences and memories.
The guestbook expires on May 30, 2020.