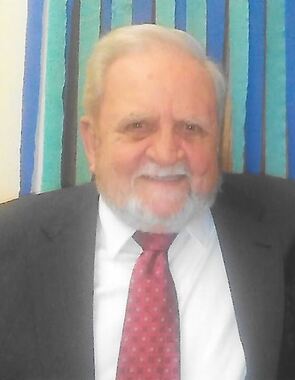 Back to Ronald's story

Ron Brauner, 81, of Joplin, MO passed away Saturday, January 4, 2020 in the presence of his loving family.
Ron was born in Girard, KS and served in both the Army National Guard and US Air Force from 1955 through 1968. After serving his country, Ron found a love for sales and held many positions throughout his long career. Prior to retiring, he went to work for Walmart where he held positions in electronics, lawn and garden and the vision center.
Ron had also been active as Shriner in the Mirza Temple in Pittsburg, KS and was a lifelong Kansas City Chiefs fan. Ron enjoyed spending time with his family and friends and had a gift for story-telling.
Survivors include his wife of 51 years, Cathie; sons Dwayne Brauner (Jennifer), Mark Brauner; Neil Brauner, Joseph Brauner; sisters Darlene Anderson and Pat Frakes; brother J.B. Wright; grandchildren Blake Brauner, Greta Brauner, Gunther Brauner, Riley and Aaden Brauner and one great grand-son.
Arrangements are under the direction of Midland Cremation Society in Joplin, MO. In lieu of flowers a donation to the Shriner's Children's Hospital would be appreciated.
Published on January 12, 2020
To send flowers to the family of Ronald E. Brauner, please visit Tribute Store.

Send flowers
in memory of Ronald

A place to share condolences and memories.
The guestbook expires on January 08, 2021.

Jess & Judy Penner
We sure will miss Ron. We enjoyed discussing world matters at lunch at the Webb City Senior Citizen Center. Cathie, we hope you will come over to the center sometime. Miss you.
View all