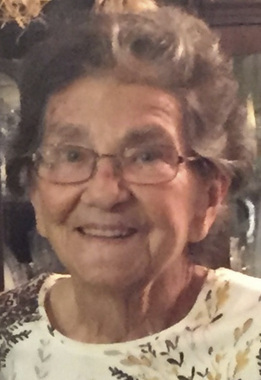 Back to Wilma's story

JOPLIN, Mo. - Wilma J. Oberley, 83, of Joplin, Mo., formerly of Weir, Kan., died Thursday, Oct. 20, 2016, at Freeman West Hospital, in Joplin, Mo.
Wilma was born Nov. 27, 1932, in Weir, the second oldest child of 11 siblings, the daughter of William and Jeanne Cunningham Sullivan. She graduated from Weir High School.
She married George Oberley on May 2, 1953, and he preceded her in death on July 28, 1990.
She was also preceded in death by a son, Joseph Oberley.
Wilma was a homemaker and also assisted her husband, George, with the Oberley Engineering Company, in Webb City, Mo.
She is survived by three sons, George Oberley, Vincent Oberley (Lori) and John Oberley, all of Joplin; one daughter, Frances Ann Oberley, of Leavenworth, Kan.; two sisters, Margie Stricklin (Willis), of Galena, and Gloria Powell (Doug), of Webb City; seven grandchildren, Tyler, Nathan, Gia, Kayse, David, Chrystel and Eric; and nine great-grandchildren. She was preceded in death by her parents; husband; son; six brothers, Michael, Dan, Pat, William, Francis and Dennis Sullivan; two sisters, Kay Jones and Mary Sullivan.
Funeral services will be 11 a.m. Monday, Oct. 24, at the Bath-Naylor Funeral Home, in Weir, with Father Chrysostom Ah Maung and the Rev. Aaron Williams, officiating. Burial will be in the St. Anthony's Cemetery, in Weir. The family will receive their friends from 10 to 11 a.m. Monday at the funeral home, where the parish rosary will be recited at 11 a.m.
Condolences may be left
at our web site
www.bathnaylor.com.
Published on October 22, 2016
To plant a tree in memory of Wilma J. Oberley, please visit Tribute Store.

Plant a tree in memory
of Wilma

A place to share condolences and memories.
The guestbook expires on October 21, 2017.